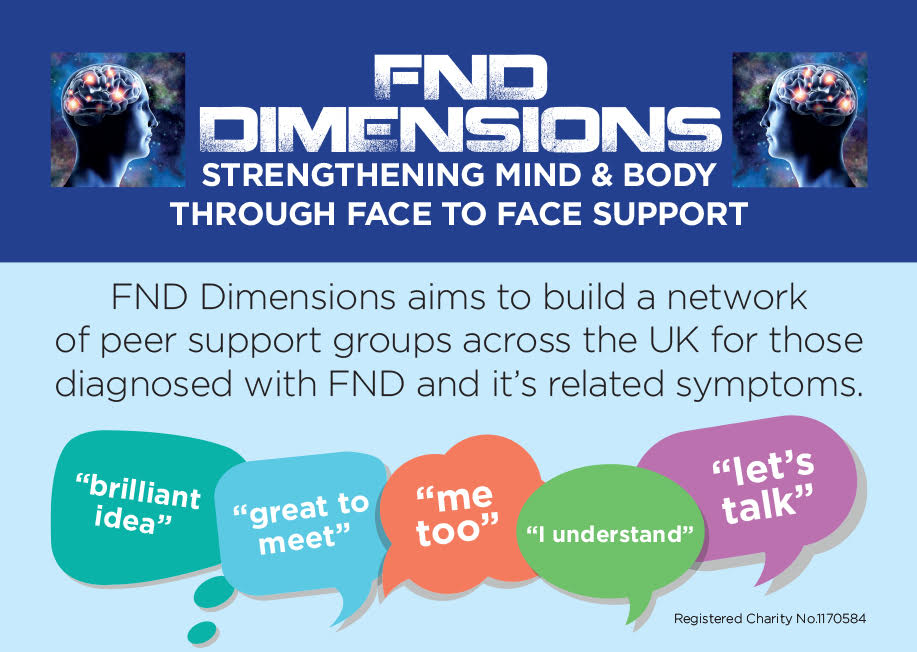 Below are comments directly taken from participants about the value and benefits peer support groups. No names are given in order to maintain confidentiality.

The Value of Peer Support

Participant 1
“To help keep our sanity in the very lost and dark world of FND. To help share ideas, give much needed support and guidance to each other. Free coffees please!!”

Participant 2
“The benefits of meeting people face to face with the same condition as you are: – Not having to explain the many complex symptoms you experience – Not feeling like you are being judged for having a ‘good’ day – Sharing vital information on health care professionals and gaining knowledge you otherwise may not be exposed to – Not feeling isolated – Being able to speak freely and knowing people ‘get it’ because they’ve ‘got it’ – Making new friends – Having an excuse to leave the house that isn’t for another doctor’s appointment – Having a support network for the many bad days!”

Participant 3
“I think I feel a little less lost. We begin to feel so isolated and it’s reassuring knowing there are others locally and that we can build friendships and support each other. We’re with the people that ‘get it’ rather than having to explain ourselves.”

Participant 4
“I was just losing my grasp on everything but the group grounded me.”

Participant 5
“I just lit up inside when there was mention about the group. I’d had no one to talk to who could ‘get it’. I started to doubt the diagnosis myself and with my employers piling on the pressure and making me feel as if I was deliberately being slow and forgetful, even after receiving letters from both my GP and the hospital, I’d sunk into a miserable depression. Leaving the university was something that, in many ways, the right thing to do but I know that, had it been an illness they had heard of, I would probably still be there on a part time basis. Meeting up with others with the same condition has helped me to stop feeling guilty. I knew theoretically that FND fitted in with my health problems but somehow meeting with others has cemented my understanding of what I have to deal with and despite the efforts of my former employer, it’s not actually my fault.”

Participant 6
“It was a relief listening to other people talking about their symptoms and realising I wasn’t the only one. I’ve read and heard about others ‘FND journey’ a journey that is far too often taken alone. Finally, here was a group of people who could share that journey – no holds barred, talking freely and without the fear of being judged. Thank you.”